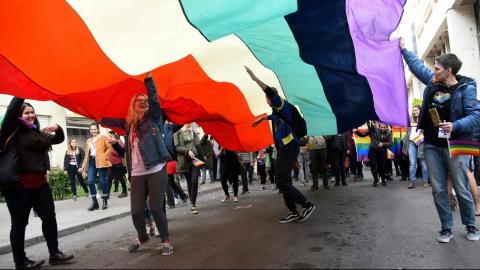 The Pro-Russian opposition Democratic Front in Montenegro on Wednesday accused a "gay lobby" of trying to seize control of political parties and of undermining traditional values.

The Front called on the LGBT community to form a party if it wants to engage in political life - and accused it of cooperating with the secret service, NGOs and the media against parties like their own that cherish "family values".

"They carry out brutal attacks on traditional conservative political parties, our culture, identity and church and spiritual heritage," the alliance said in a press release.

"Since its inception, the Front has been the main target of the political subversive action of gay lobbies, especially when we have publicly exposed them and explained their goals to the citizens," it added.

The attack on the "gay lobby" follows weeks of sharp exchanges over the status of the country's Serbian community and electoral reforms between the socially conservative opposition and other parties.

The row over gay rights started on August 9, when the local authority in the resort town of Budva, which is run by the Front, announced it would host a kick-off event for the Serbian Guca Brass Band Festival.

Liberal parties in the governing coalition objected to the idea, which drew a press release from the Front claiming that some "sensitive" politicians in Budva would probably rather invite UK gay pop star Elton John and his husband.

Two Front officials from Budva distanced themselves from the homophobic statement, saying it "crossed the border of good taste." The former head of the local authority in Budva, Djordjije Vujovic, denied having signed the statement that mocked the assumed sexual orientation of other politicians in the municipality.<...