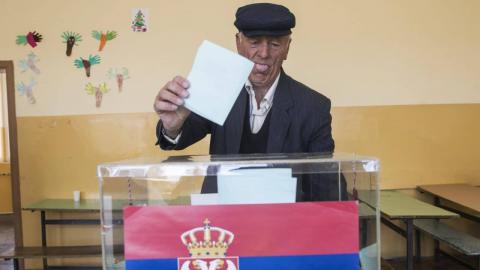 Parties in the opposition Alliance for Serbia are united in opposing the Progressive-led government - but not united on whether to participate in upcoming elections.

A majority of representatives have hinted that a boycott might be the best solution.

It comes after President Aleksandar Vucic announced that elections for all levels of power in Serbia, except for the presidency, would be held in spring 2020.

"I predict that the Alliance for Serbia will decide in September to boycott the elections, but let's wait two more weeks," Nikola Jovanovic, the vice-president of one member party in the Alliance, the People's Party, said in Friday's issue of the daily paper Danas.

He added that he did not believe the current dialogue between the ruling Serbian Progressive Party and the opposition, now entering a third round, would have a positive outcome.

In a surprise move, representatives of the ruling party and the opposition met for the first time on July 30 at the Belgrade Faculty of Political Science in the presence of NGOs to discuss the elections.

A second meeting was held on August 9, but this time without the presence of one of the main Alliance parties, the Freedom and Justice Party, led by former Belgrade mayor Dragan Djilas.

It has already announced it will not attend the third meeting scheduled for August 19.

Its main objection has been the lack of transparency at the meetings, as they are held under so-called Chatham House rules, meaning that nothing said at them can be sourced.

The ex-mayor's party is also clear that it will not participate in the coming elections.

"In these electoral conditions, we have to boycott. It is an instrument to delegitimize the illegal holding of elections," Freedom...