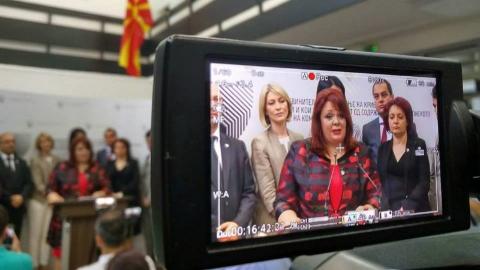 "The investigation should have reacted much sooner. It should have summoned Janeva for questioning; that is the least they could have done," a lawyer in Skopje told BIRN on Thursday on condition of anonymity.

"Based on the incriminating indications revealed to the public thus far, I am convinced that had it been any other 'normal' person, they would already have been questioned and could have had their passport seized or been put in custody," another lawyer from Skopje said.

BIRN contacted three lawyers on Thursday, and each agreed that the investigation was running inexplicably slowly.

The regular Prosecution for Organised Crime and Corruption opened the investigation on July 15. The same day, chief suspect Bojan Jovanovski, and his suspected accomplice, Zoran Milevski, were placed under arrest.

They are suspected of extorting money from a third person, the businessman Orce Kamcev, who is himself a suspect in another case run by the SJO, codenamed "Empire". It is alleged that they took cash from Kamcev in exchange for a promise to help him either avoid a jail sentence, or get a lighter sentence, by using their alleged influence with the Special Prosecution.

It also seized Chief Special Prosecutor Janeva's phones to check any suspicions that she had connections with them. One phone was seized immediately while the other was found at a relative's home - after Janeva initially reported it lost.

The second phone was formatted with the data deleted from it, the prosecution later told the media.

"The fact that the prosecution found the other phone with its contents deleted, after Janeva reported it lost, is a strong indicator of possible wrongdoing. For that alone, Janeva could have been detained," the third lawyer that BIRN...