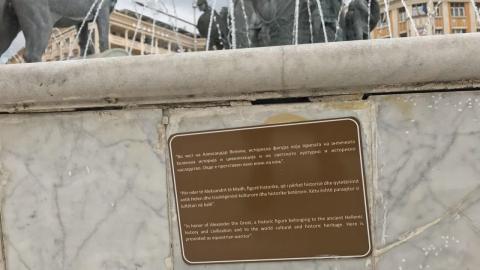 Unknown perpetrators in North Macedonia have removed or smashed plaques added to several statues and monuments in Skopje - which explained that they depict historical figures "belonging to the ancient Hellenic history and civilisation and to world cultural and historic heritage".

The action occurred just one day after the authorities put them up.

The erection of the explanatory plaques, written in Macedonian, Albanian and English, formed part of the landmark "name" agreement signed with Greece in June 2018.

This aimed to finally resolve the decades-long dispute with Greece over the name of the country that saw it change its name from Republic of Macedonia to Republic of North Macedonia.

In exchange, Greece promised to stop blocking its neighbour's accession to NATO and the start of its EU membership talks.

Under the agreement, North Macedonia also promised to place informative plaques on disputed monuments depicting figures from classical antiquity, which Greece considers an exclusive part of its own heritage.

The monuments were built from 2010 onwards by the previous government led by Nikola Gruevski as part of a grand revamp of the capital, dubbed Skopje 2014. While some locals like them, they further soured relations with Greece, which saw them as a provocation.

Under the "name" deal, North Macedonia also promised to remove...