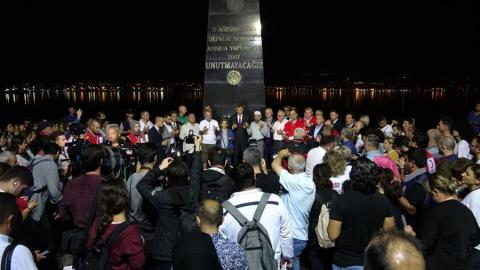 Turkey marked the 20th anniversary of the 1999 Marmara earthquake, the worst seismic disaster in the country's recent history that killed around 18,000 people and wounded 50,000, with various commemoration events organized across the Marmara region on Aug. 17.
Crowds, as they have every year, gathered in front of the Earthquake Monument in the town of Gölcük - the epicenter of the quake - in the northwestern province of Kocaeli at 3:02 a.m. on Aug. 17, the exact moment when the 7.5-magnitude quake struck the region.
"In the Marmara earthquake, which was a big disaster for our country, thousands of our citizens lost their lives, tens of thousands of people were injured, losing their houses. Although the years that have passed since healed our wounds, they have neither mitigated our pains nor made us forget our loved ones. And the upcoming years will also not make us forget," said a statement released by the Kocaeli Governor's Office.
On Aug. 16, Environment and Urbanization Minister Murat Kurum said Turkish authorities had since the Marmara quake inspected 730,000 buildings across the country, assessing their resistance to a possible future earthquake.
He said that the quake had destroyed 96,808 dwellings and 15,944 workplaces, especially in the provinces of Kocaeli, Sakarya, Yalova, Istanbul, Bolu and Düzce. It also led to damages in 231,364 dwellings and 32,569 workplaces, he said.
Of the destructed dwellings, 43,146 of them were rebuilt by the government following the disaster and were handed to their owners, Kurum said.
"I hereby commemorate our citizens who lost their lives in the Aug. 17, 1999 quake…Since 1999, our state has put out all the stops for similar pains not to be relived and our citizens to live in more sturdy and safe...

Private sector foreign debt down at end of 2019