In Bucharest, Ceausescu’s Fountains Dance the Night Away 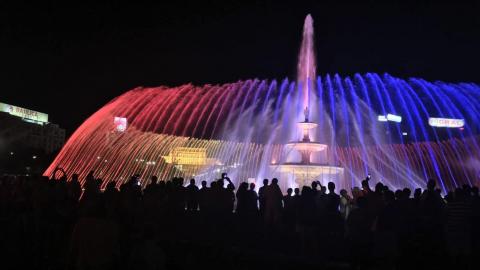 As the giant digital clock strikes 9 p.m., bursts of water surge from the fountains, lit up in colour and dancing to the music of Johann Strauss, Pharrell Williams and sprightly Romanian songs.

Sponsored by Bucharest's public water provider, the 'Symphony of Water' might look like any other holiday-season tourist attraction in a big European city. But it means so much more to Romanians.

The fountains, and indeed the entire urban backdrop, were the brainchild of none other than Romania's Communist dictator from 1965 until 1989, Nicolae Ceausescu.

One of his flagship projects was the People's Palace as the centerpiece of a 1980s urban development drive that would change the landscape of Bucharest forever and create a Communist version of the Champs Elysees in Paris.

Today Romania's parliament, the marble People's Palace is the second largest administrative building in the world after the US Pentagon.

Stretching some 3.5 kilometres, the boulevard was called Victory of Socialism and was lined with white marble apartment blocks to match the People's Palace, flamboyant fountains and gardens.

The rate of construction cost hundreds of lives and as much as seven square kilometres of historical villas, churches, synagogues and other monuments deemed decadent by the dictator were demolished to make room for the new socialist city.

Stuck with Ceausescu's urban vision but loath to embrace it, Romanians let the foundations run dry, some clogged with rubbish for most of the country's 30 years of democracy.