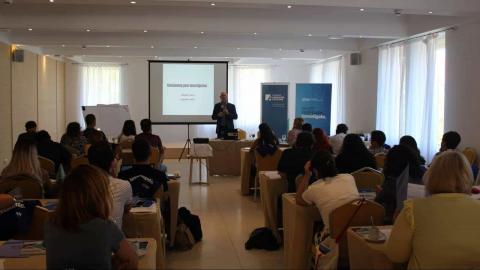 The 10th edition of the BIRN Summer School of Investigative Journalism kicked off on Monday in the Montenegrin coastal town of Herceg Novi.

On the first day, after an introduction by Marija Ristic, regional director of the Balkan Investigative Reporting Network, those attending heard from Reuters investigative projects editor and the school's lead trainer Blake Morrison about how to approach complex investigative stories, pitch ideas and find the right words to craft them.

"Experts aren't simply meant to be quoted in stories," Morrison said in one of his tips for those attending.

"The best ones - the most helpful, at least - are the ones who serve as your guide to understanding what you cover. Find a few. Be aware of their biases and treat them with a reporter's skepticism. Ask them what are you missing. What do they see?"

Suddeutsche Zeitung journalist Frederik Obermaier, who was part of the Panama Papers investigation, spoke about investigating data, verifying leaks and the problems he and his team faced as they trawled though terabytes of data.

"Authenticity, public interest, no conditions, request for comment and known identity of the source, are 5 tips on what to check for when dealing with data leaks," said Obermaier.

The debate continued during Obermaier's second session when he looked at the case of the video leak that brought down Austria's right-wing vice-chancellor, Heinz-Christian Strache, and eventually the country's coalition government.