A Flock of Flamingos Cooled on Lake Atanasovsko in Burgas 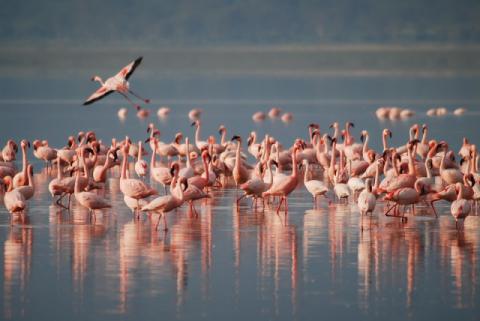 A flock of 159 pink flamingo birds was observed in the northernmost part of Atanasovsko Lake in Burgas. Of these, about 120 are adult specimens, coloured in bright pink.

The census was made during the ornithological monitoring of the Bulgarian Society for the Protection of Birds / BSPB /.

The ornithologist Petar Yankov from BSPB said that the birds are calm, not particularly impressed with human presence and do not fly away, but only enter the pools further. He reports that this is the highest number of pink flamingos in Bulgaria since 126 birds were officially counted last fall.

The pink flamingo probably flies here from the Maritza Delta or from Turkey, where it nests in many thousands of colonies. In recent years, the species has begun to expand and occur more and more north, with several pairs nesting in Ukraine in 2017. One of the reasons for this expansion is believed to be global climate change, explained Yankov.

BSPB said that in addition to pink flamingos, there are also many pink pelicans in the lake. Up to 4,000 birds can be seen there, sleeping and resting on the dikes during the day, and fly to Lake Vaya during the day to feed. There are also numerous flocks of drinkers such as coastal snippets, water runners and shore guards.