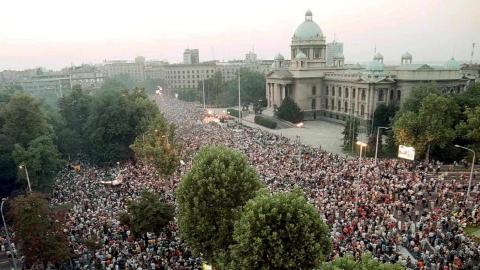 The main opposition political alliance of the day, the (sound familiar?) Alliance for Change, SZP, attempted to place itself at the helm of these protests. As ever, the opposition was divided and fragmented. Aside from the SZP, another force, the Serbian Renewal Movement, SPO, was also vying for leadership of the opposition.

After weeks of rival protests around Serbia, the SZP and SPO agreed to attend a joint rally in Belgrade on August 19, formally convened by the G17 Group. It was to be a culmination of the popular protests, an opposition rally to crown all opposition rallies, after which nothing would be the same. Opposition parties demanded the departure of Milosevic, a transitional government, and free and fair elections.

The choice of date was symbolic. It was to be held on the Orthodox Feast of the Transfiguration, marking the moment in the New Testament when Jesus was "transfigured", and revealed his divine nature to his Apostles. After this miracle, nothing was the same! In traditional culture, the feast also marks the highpoint of the summer, after which temperatures drop and everything begins to change, heralding the arrival of autumn.

Unfortunately for the Serbian opposition, everything was very much the same after the 'Transfiguration Rally" of August 19, 1999. Over 100,000 demonstrators listened to the many opposition leaders, who - just about - maintained a united front. Yet, the day after, Milosevic was still in power, showing no interest in a transition government, while the opposition leaders were at a loss as to what to do next. They had no way of forcing Milosevic to accept their demands, or resign.

The Transfiguration Rally marked the high point of the 1999 protests, which began their terminal decline thereafter,...