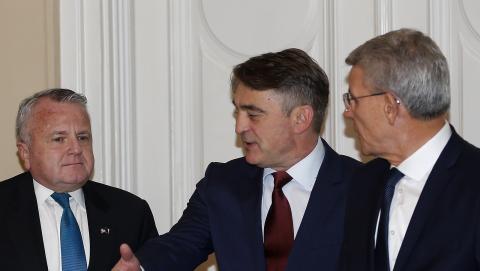 The presidency - comprising a Bosniak, Serb and Croat - was unable to agree the agenda for Tuesday's session and so postponed the meeting and a decision on appointing a prime minister, or the chair of the Council of Ministers.

Disagreement over the submission of Bosnia's Annual National Programme - a precondition for activation of Bosnia's Membership Action Plan, MAP, for NATO - is thwarting the formation of a national coalition government between the main Bosniak, Serb and Croat parties that emerged victorious from elections in October 2018.

The three parties - the Party of Democratic Action, SDA, the Alliance of Independent Social Democrats, SNSD, and the Croatian Democratic Union, HDZ - announced on August 8 that they had agreed 12 principles on a range of issues that had held up formation of the government.

But hopes the country would soon get a government were quickly dashed when disputes emerged over what had been agreed regarding Bosnian accession to NATO, which the Bosnian Serb SNSD fiercely opposes.

"During the pre-session consultations, some topics were removed," said Zeljko Komsic, the Croat member of the presidency and its current chair. "Among them is the ANP."

"There was no agreement, so it was decided to postpone the session on the mandates (for chair of Council of Ministers)," Komsic told reporters.

"If you ask me what's going to happen next, I am sorry. For those 15 minutes I wished that a compromise would be reached and we would solve all the misunderstandings...