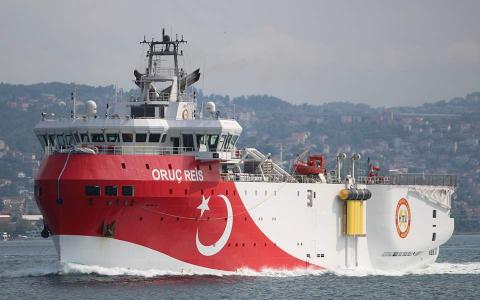 Amid heightened regional tensions, a fourth Turkish ship, the Oruc Reis research vessel, is on its way to the Eastern Mediterranean, Turkish Foreign Minister Mevlut Cavusoglu announced Monday via his Twitter account.

The tweet came in response to comments by the leader of the opposition Turkish Republican People's Party, Kemal Kilicdaroglu, who had questioned why Turkey supposedly did not currently have a presence in the area.
Cavusoglu sarcastically remarked that Kilicdaroglu evidently believed that the Fatih, Yavuz and Barbaros that are active off the coast of Cyprus were Greek vessels.
For its part, Athens was not taken by surprise by Ankara's latest move to send the Oruc Reis to the region, as it is seen as the culmination of a stated strategy by Turkey to encircle Cyprus as far as possible.

Moreover, as Kathimerini had revealed on July 28, the Turkish...