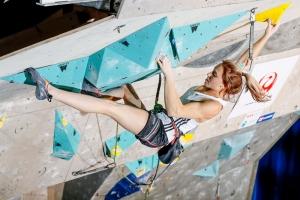 Garnbret had already secured gold in the women's lead discipline on Thursday after defending the title of bouldering world champion a week ago. Her sixth world championship gold medal overall makes her the most successful athlete in the history of the sport.

Combining speed, bouldering and lead, the new discipline has been created especially for the 2020 Summer Olympics in Tokyo, the first time that climbing will be included in the Olympic Games.

Podium winners in the event are determined by the lowest product of the climbers' ranks after three rounds in each of the three disciplines. Garnbret placed sixth in speed, 4th in boulders and top in the lead, which gave her 12 points.

Silver went to Japanese Akiyo Noguchi, who scored 21, and bronze to Briton Shauna Coxsey, who scored 42.

Garnbrent entered the final stage, the lead, from 4th spot, with...