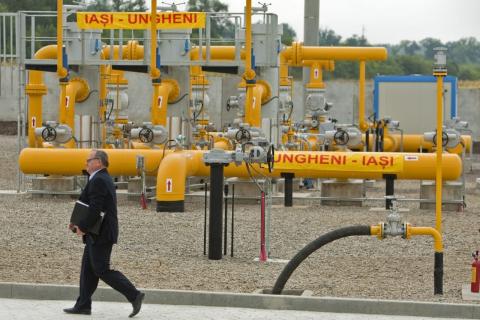 Moldova and Ukraine have signed a contract to upgrade gas distribution stations for imports from Romania, stepping up preparations for potential supply disruptions as their gas contracts with Russia come close to expiring.

Ukrtransgaz, the Ukrainian national gas company, said the deal would further consolidate energy security for both former Soviet republics with an eye on the heating season of autumn/winter 2019/2020.

"It is a very important project for Ukraine and Moldova because it helps them to diversify their gas import routes," Ukrtransgaz said in a statement.

Both Kyiv and Chisinau's gas delivery contracts with Russian Gazprom expire at the end of this year, just as the TurkStream pipeline is due to come online and bring Russian gas to the Balkans via Turkey, bypassing Ukraine and Moldova.

Work in Romania on the Iasi-Ungheni-Chisinau pipeline that will link Moldova to the European energy system is only expected to be completed in the spring of 2020.

Ukrtransgaz says it is preparing to open a new redirection point for gas flows, allowing it to import 1.5 billion cubic metres annually from Romania via Moldova. New gas flow measurement and management stations have been installed at the Moldovan-Ukrainian border.

"The companies Ukrtransgaz and Moldovagaz have established the technical solutions necessary for the creation of new import capacities based on the Trans-Balkan gas pipeline system, on the south-north direction," Ukrtransgaz said.

Since Moscow's annexation of Ukraine's Crimean peninsula in 2014, Ukraine and Russia have clashed repeatedly over energy...