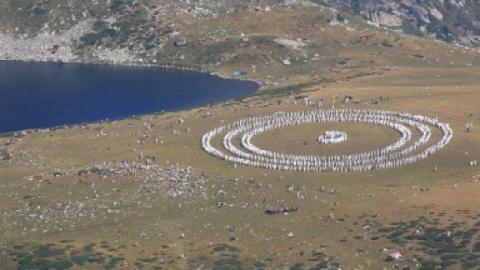 Thousands of pilgrims gathered Monday in Bulgaria's Rila mountains to welcome their "spiritual" new year with a cosmic-like dance performed in concentric circles, creating a striking image on the verdant mountain plain.

The white-clad dancers hiked up to Bulgaria's Seven Rila Lakes at an altitude of 2,100 meters (6,900 feet) and performed a special meditative dance known as "paneurhythmy" for more than an hour under the sound of singing and violins.

They are followers of the Universal White Brotherhood -- an esoteric society that combines Christianity and Indian mysticism and was founded by Bulgarian theologian Peter Deunov back in 1897 but banned during communism and still considered a sect by the country's Christian Orthodox Church.

The movement does not keep track of its numbers but is believed to have tens of thousands of followers worldwide, possibly more -- the majority of them in France, Belgium, and Switzerland but also as far as the US, Canada, Mexico, Iceland and the Democratic Republic of Congo.

Its followers believe that positive cosmic energy is at its strongest in the region of the Seven Rila Lakes around August 19 and that paneurhythmy will help them channel it and spread it around the world.

"Paneurhythmy combines music and movement (...) With these exercises we get in touch with the physical, the spiritual and the divine worlds," said Ventsislav Kuninsky, a 59-year-old machine engineer and follower of the Universal White Brotherhood for 30 years.

Others found purely individual pleasure and health benefits in the exercises that seem graceful and easy but are in reality quite strenuous to perform.

Some EU countries attempt to mediate in Cyprus, says Özersay