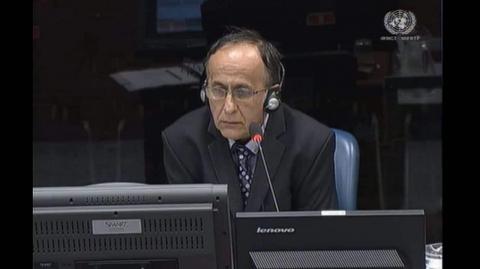 A defence witness in the war crimes retrial of former Serbian state security officials Jovica Stanisic and Franko Simatovic said on Tuesday that the State Security Service, SDB, that they led was not involved in establishing a training camp in a Serb breakaway statelet in Croatia in 1991.

Prosecutors say the camp in Golubic, near the former rebel Serb stronghold of Knin, was one of a number set up by Serbia's SDB to train special forces troops in the Belgrade-backed rebel war against Croatian forces following Croatia's secession from federal Yugoslavia.

Stanisic, who led the SDB, and his former assistant 'Frenki' Simatovic, were acquitted in 2013 of war crimes against non-Serbs in Croatia and Bosnia, but the decision was overturned on appeal and a retrial ordered. Both pleaded not guilty again in December 2015. Simatovic headed the SDB's Special Operations Unit.

Mile Bosnic, a former official in the self-proclaimed rebel statelet in Krajina, said the SDB had no involvement in setting up the Golubic camp.

"No," he said. "The Serbian National Council asked for help from Serbian Interior Ministry, the request was addressed to the Ministry."

"We realised that we could not resist unless we have at least one mobile and well-trained unit that would be capable of intervening quickly in the territory of SAO Krajina if there was a raid by the special forces of Croatia," Bosnic told the hearing. "It was then decided to request assistance from Belgrade."

Bosnic, who also testified in the first trial, said the camp was set...