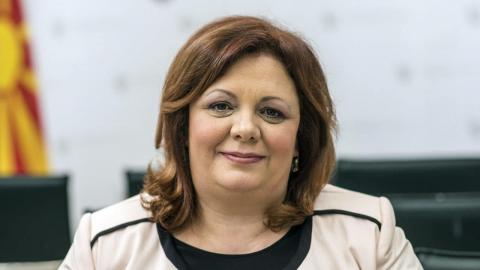 Police in North Macedonia arrested outgoing chief special prosecutor Katica Janeva on Wednesday, the latest twist in a scandal rocking the government and undermining the credibility of the country's anti-corruption drive.

Janeva was arrested at her home on the request of the regular prosecutor's office for organised crime, which is investigating the so-called 'Extortion' scandal that erupted in July.

Chief Public Prosecutor Ljubomir Joveski told a press conference that Janeva, who was questioned for four hours on Tuesday, was arrested on suspicion of "abuse of office" and that prosecutors had gathered "irrefutable evidence" against her.

Janeva has denied any wrongdoing and declared on Tuesday she felt "no guilt whatsoever".

The scandal erupted in July when businessman Bojan Jovanovski and alleged accomplice Zoran Milevski were arrested on suspicion of extorting money from another businessman, Orce Kamcev.

It is alleged that they took cash from Kamcev in exchange for a promise to help him avoid jail or receive a lighter sentence in another case by using their alleged influence with Janeva's office, the Special Prosecution, or SJO.

Janeva resigned in July, citing a political dispute over legislation to resolve the status of the SJO, created in 2015 to investigate high-level crime during a crisis involving the previous government.

On August 8, Italian newspaper La Verita began publishing recorded conversations allegedly between Kamcev and Jovanovski in which Janeva's voice could also be heard.

Janeva confirmed it was her voice but said she was negotiating with Kamcev over another unnamed case and that her actions were legitimate.