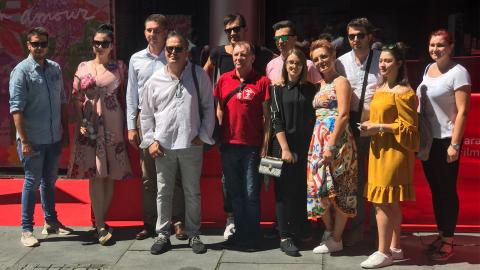 With no narrator, the film allows the viewers to question their own prejudices.

What became mistakenly known as Gornja Maoca - in fact Gornji Fatovi - made international headlines for the best part of a decade, rightly or wrongly, as a stronghold of radical Islam, its residents spurning modern technology and suspicious of outsiders.

Police raided the village in 2010, arresting seven, while community leader Nusret Imamovic became infamous for condoning suicide attacks. Arrested and later released without charge in connection with a 2011 gun attack by a Bosnian Islamist extremist on the compound of the US embassy in Sarajevo, Imamovic left for Syria in 2013.

Somewhere along the way, someone wrongly named the village Gornja Maoca. Media reports have never corrected it.

"If they knew of the damage caused, someone would have done the story of the actual village of Maoca," said Ajnadzic.

Several personal stories stand out in the film. The local imam, Asmir Bekric, tells of how his colleagues often appear surprised to hear his stories of the real Maoca as a place like any other, with good, hard-working people.

Mirza Mujkanovic, a motorcycle afficionado and truck driver, explains his run-ins with border police when they see the address in his ID card as he drives his cargo across the border. Now he shaves every time before he travels. Edina Kadric, a maths student, says her parents advised her to choose a brightly-coloured veil instead of a dark one, out of fear that she might appear too hardline in her faith.

The stories testify to the indignity felt by the residents, of having to endure...