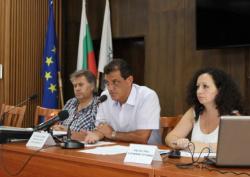 Three new cases of African swine fever (ASF) in wild boar have been reported in the villages of Prosena, Mechka, and Pisanets. Deputy Regional Governor of Ruse Svilen Ivanov together with Dr. Nikolay Nenov of the regional directorate for food safety held a meeting of the permanent interdepartmental regional epizootic commission to discuss the complicated situation of the African swine fever in the region, said the press office of the regional administration in Ruse.
A new outbreak of the disease at an industrial pig farm was found in the village of Karamanovo this week, bringing the number of affected industrial farms in the region to four. As of yesterday, the culling of all 4,500 pigs has begun. Also, since Monday, three new cases of infected wild boar have been reported in the villages of Prosena, Mechka, and Pisanets.
A detailed biosecurity analysis of the affected pig farms is being carried out to ensure that all necessary measures will be taken before restarting the farms. A team from Germany that is assisting will prepare a detailed assessment of all affected industrial farms in northern Bulgaria.
The total number of pigs euthanized is 70,440, excluding the animals slaughtered yesterday at the farm in Karamanovo.
It is important to note that the current trend at the national level is towards an increase in the incidence of African swine fever.