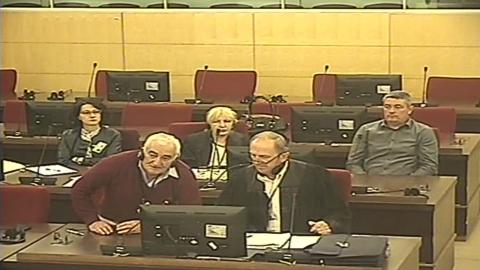 The Appeals Chamber of the Court of Bosnia and Herzegovina has confirmed a verdict under which Bosnian Serb former soldier Zdravko Lubarda was sentenced to six years for participation in the persecution of Bosniak civilians in the eastern Rogatica area and former police reservist Ozren Planojevic was acquitted.

The Court of Bosnia and Herzegovina announced on Friday it rejected the appeals filed by the State Prosecution and Lubarda's defense as unfounded and confirmed the first instance verdict passed down by the Bosnian State Court on December 24 last year.

In a separate case, the Appeals Chamber cut from 10 years to five the prison sentence handed down in September 2018 against Bosnian Serb former soldier Petar Tasic for crimes against civilians in the eastern Visegrad area while fellow former soldier Momir Tasic had his 14-year sentence confirmed.

Under the first instance verdict, Petar Tasic was found guilty of removing Bosniak civilians while Momir Tasic was convicted of the forcible disappearance of civilians and rape.

"After holding a session, the Chamber of the Appeals Section with the Court of Bosnia and Herzegovina passed down a verdict, rejecting an appeal filed by the defense of defendant Momir Tasic as unfounded and partially upholding an appeal filed by the defense attorney of Petar Tasic and sentencing him to five years' imprisonment," the State Court said. "The Chamber confirmed the remaining part of the first instance verdict," it added.