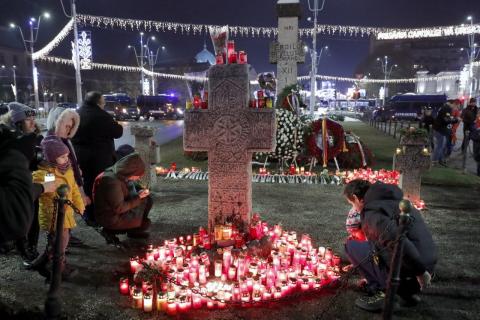 The governments of Romania, Poland and the Baltic republics of Estonia, Latvia and Lithuania condemned "the crimes perpetrated under the ideology of Nazism and Stalinism" in a joint statement on Friday marking the 80th anniversary of the Nazi-Soviet pact that divided Europe into spheres of influence.

The five countries, which spent decades behind the Iron Curtain, said they wished to "remember all those whose deaths and broken lives" were caused by the two totalitarian ideologies.

The pact, named after the German and Soviet foreign ministers behind it, "sparked World War II and doomed half of Europe to decades of misery," the statement said, in reference to swathes of the continent that remained under Moscow's domination until the fall of the Berlin Wall in 1989.

"We believe that Europeans will never tolerate totalitarianism or genocide against any people."

In a separate statement, Romanian President Klaus Iohannis condemned "Fascism and Communism" and expressed respect for their victims and for those who fought against totalitarian oppression.