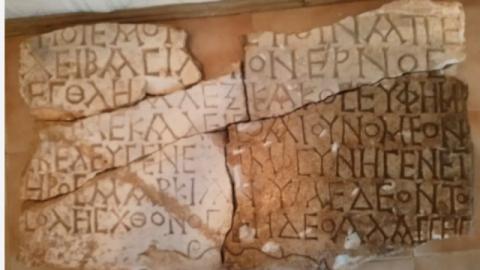 A marble slab, divided into four fragments, with a text in Greek in the Homeric style, was discovered next to the early Christian basilica, located two kilometers east of the village of Shkorpilovtsi, Dolni Chiflik municipality.

This was announced to Radio Varna by Dr. Hristo Kuzov, the head of the excavations, which were resumed after a 40-year hiatus.

Dr. Kuzov explained that the inscription was posted on the cult of the Virgin Mary and is an address by Euphemia, the daughter of Emperor Marcian. Kuzov told the BNR that this inscription is a rarity in the late antique era:

The slab will be restored and displayed at the Regional History Museum in Varna. Archaeologists hope to find other epigraphic monuments near the Basilica in Shkorpilovtsi.