Making a ‘CAT-scan image’ of the inside of the Earth 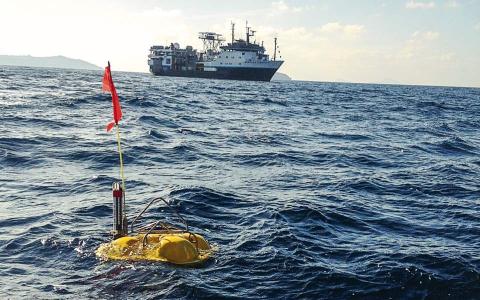 It's November 2015, on the Cycladic island of Santorini. In defiance of the bitter cold, a large group of scientists of various specializations from the United States, Britain and Greece are stood on the bridge of the Marcus Langseth, one of the largest seismic vessels in the world, scanning the horizon for traces of an orange flag.

A short time earlier the boat had sent a signal for seismographs on the seabed to rise to the surface of the sea. The crew would spot them from the orange flag on top of them.
If one didn't know it, it would be hard to guess that all this was related to the Santorini volcano, nor that a pioneering research project was under way: the worldwide mapping of the magma chamber of an active volcano, the results of which were published recently (Hooft et al., 2019, EPSL).