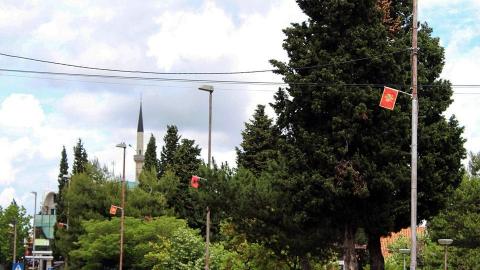 Representatives of the ethnic Albanian-majority Tuzi municipality and the Albanian diaspora unveiled a monument on Sunday to Dede Gjon Luli, an Albanian nationalist figure and guerrilla leader, in front of his former home in the village of Bardhaj, which has been turned into a museum.

Anton Berishaj, an academic at the Kosovo Academy of Sciences and Arts who attended the unveiling, said Albanians should celebrate Luli as a hero.

"All Albanians, not just in Malesia [a historical region in northern Albania and southern Montenegro], should be proud of him. There is still work to be done on this [memorial] complex, and it would not be bad if there was institutional support," Berishaj told Voice of America.

The mayor of Tuzi, Nick Djeloshaj, said the municipality would improve the roads to the museum to encourage tourism, while Albanian diaspora representative Djok Gojcaj, from the US-based organisation Trieshi, who also attended the unveiling, said Albanians from abroad would continue to help promoting their culture and history.

But the monument was described as a provocation by some Montenegrin Serbs, who argued that Luli had fought against Montenegrins.

"Dede Gjon Luli is known for advocating that [the eastern Montenegrin] Plav and Gusinje [areas near the border with Albania] do not belong to Montenegro," said Montenegrin Serb website in4s, which is seen as close to the opposition Democratic Front alliance.

"They remain silent [because of] the pre-referendum agreement of...