Bosnia Must Not Abandon its NATO Aspirations 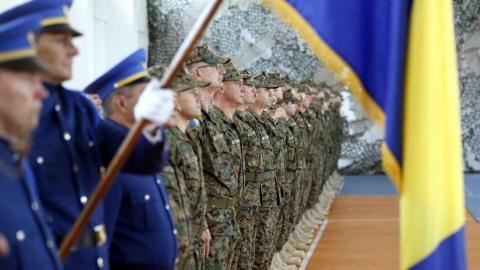 What followed was a maelstrom of confusion: Dodik and the SNSD explicitly claimed to have buried the matter, while the Bosniak nationalist Party of Democratic Action, SDA, vacillated. Its leader Bakir Izetbegovic initially conceded that Dodik's obstructionism had succeeded - only for the Bosniak and Croat members of the presidency, the SDA's Sefik Dzaferovic and Democratic Front's Zeljko Komsic, to retort briskly that there would be no formation of a government without the ANP.

In other words, Wigemark's triumph turned to ash in record time. And worse, his botched diplomatic foray had now further sharpened the divide: the question of forming a government was now a zero-sum confrontation over Bosnia's relationship with NATO.

The pat answer to all this in European diplomatic circles is that forming a government must trump Bosnia's (realistically, still distant) NATO ambitions. After all, the ANP is a relatively minor, technical document and one, which in any case, is already complete, and has merely been awaiting formal approval, since September last year.

As such, the country's aspirations to join the Western alliance would be neither dashed nor dramatically advanced regardless of the outcome of this confrontation.

This narrative, however, ignores the context and the stakes of this crisis. Too often lost in accounts of Bosnia's peculiar history and institutional arrangements is a simple truth: this is a sovereign state faced with existential threats to its independence and territorial integrity.

President of Serbia Aleksandar Vucic (R) and member of presidency of Bosnia Milorad Dodik (L) during the ceremony marking the 20th anniversary of the NATO bombing campaign of the former Yugoslavia. Photo: EPA-EFE/DJORDJE SAVIC