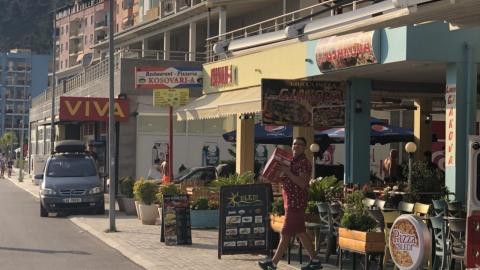 "At first we were prejudiced because we were newcomers, but we soon got used to the place," he added.

Hasani said that his business has seen a decline in revenue in recent years, but he remains satisfied, although he wants local and central government in Albania to invest more in improving utility services.

"To be honest, income has fallen over the last five years and that means we have less work, but we are still pleased, as the three months of work here in Shengjin remains our livelihood," he explained.

"Taxes are not very high but there should be more services, there must be improved services to attract tourists, because to be honest we have a problem with waste management and poor infrastructure," he added.

The tourism industry occupies an important place in the Albanian economy and is a major resource for the country's development.

In 2018, according to the National Institute of Statistics, INSTAT, 5.9 million people visited Albania, of whom 2.78 million were tourists who came to spend their holidays. According to the 2018 data, foreign nationals spent an average of 4.3 nights in Albania, spending an average of 52 euros per day.

About 2 million Kosovo citizens visited Albania during 2018, accounting for 35 per cent of the total number of visitors in the country. Overall, about 92 per cent of Kosovo's citizens have come to Albania on vacation, spending an average of 3.8 days in a hotel and spending on average an estimated 43 euros per person each day.

Given that Shengjin is mostly frequented by Kosovo citizens, businesses set up by small entrepreneurs from Kosovo in the service industry have also been growing over the last decade.<...