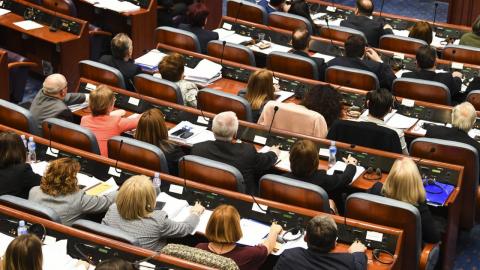 Parliament on Tuesday begins a debate on the need for a new law governing the work of the country's prosecution that will be key to defining the future status of the Special Prosecution, SJO, which targets high-level corruption.

The first test will be the initial vote on the need for such a law, which is expected to happen on Tuesday or Wednesday. It should show whether MPs from the main opposition VMRO DPMNE party will give their support.

For the first vote to be successful, it needs the support of at least 61 out of the 120 MPs in the legislature.

The second and final vote on the actual draft law is expected to happen around mid-September and will need a two-thirds majority, of at least 90 MPs, to pass.

The government led by the Social Democrats submitted the draft law in parliament this summer after several attempts to strike a deal with the opposition over the issue failed.

North Macedonia still hopes to get a start date for its EU accession talks this autumn after a recommendation from the European Commission. The Law on the Prosecution is practically the only remaining formal task that the country has yet to fulfil.

Both the government and the opposition have expressed readiness to continue talks about the issue and supported the idea of VMRO DPMNE submitting amendments in parliament.

But so far, they only agreed that none of them would like to see the outgoing Special Prosecutor Katica Janeva back in office.

Janeva was detained last week in connection with the so-called 'Extortion' affair, a major scandal that has rocked the country. The regular Prosecution for Organised Crime, which is investigating the case, suspects her of misuse of office.

Over the past few...