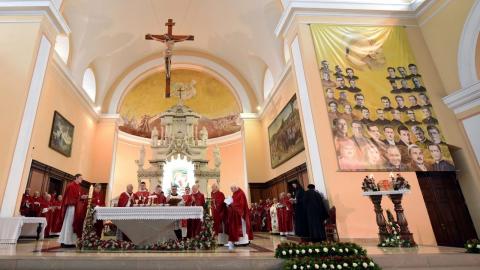 These men's suffering was a result of the war waged on clerics of all religions by the Hoxha-led Party of Labour under the slogan "Religion is the opium of the people" - a quote adapted from the writing of communist philosopher Karl Marx.

In 1976, the Party of Labour even declared Albania to be the first atheist country in the world, putting a ban on religious belief in the constitution and imposing punishments for participating in religious ceremonies and possessing religious books. Meanwhile, faith in Hoxha, communism and the party was encouraged.

Through a well-organised system of propaganda including media and movies, the dictatorial state denigrated clerics, targeting them as backward, negative influences on society, agents connected to the West, or even dangerous members of armed groups seeking to seize power by force.

But despite the state's commitment to the destruction of religious institutions, the burning of sacred books, the imprisonment and execution of priests and imams, some Albanian families continuing to practice their faith in secret even though, as so-called 'enemies of the people', this put their lives at risk.

Hoxha announces the abolition of religion

The trial of Catholic priest Gjon Shllaku in January 1946. He was sentenced to death and executed.

The war against the clergy began after the communists came to power in Albania in 1945. They saw Catholic clerics, who had strong international ties and rejected communist propaganda, as a threat.

In December 1945, dozens of Catholic clerics and believers were arrested, 39 of whom were convicted at military-led trials, with harsh penalties imposed. In March 1946, seven believers were executed.

The campaign against religion...