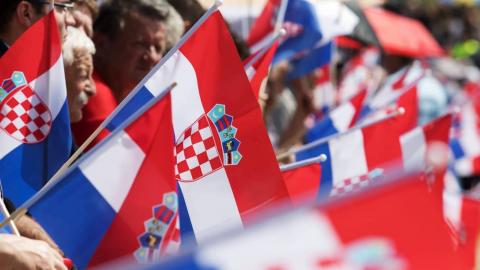 "These are individuals, perhaps organised, but they are not the fruit of some climate in society, they are deviations that need to be dealt with based on individual responsibility," Prime Minister Andrej Plenkovic said on Wednesday.

Plenkovic added that the government "won't be sucked into a spiral of hate".

The recent violent incidents are a product of years of discourse in Croatia framing Serbs - and anyone else seen as an enemy of the state - as the 'Other'. If this goes unchecked, it will destroy the social fabric that holds society together.

At first glance, all this looks like an unfortunate but explicable legacy of the 1990s war, during which Croatian Serbs rebelled against the newly-created Croatian state. Devastating wartime experience leaves scars that may never heal, stirring up ethnic or national hatred.

But why now, and why did these incidents involve young people who did not even live through the war?

After the extremely nationalistic 1990s, the 2000s seemingly brought a looser atmosphere in society.

Although extreme nationalism did pop up in far-right circles and among war veterans, with some violent episodes, these voices were silenced when Ivo Sanader won the 2003 general elections as the president of the Croatian Democratic Union, HDZ - the party that claims it "created the state".

The Independent Democratic Serb Party, which represents Croatian Serbs, supported his government, and Sanader came to celebrate Orthodox Christmas with representatives of the Serb minority.

Croatia then showed a friendly face, improving the position of Serbs and even prosecuting some of the war crimes committed against them. On the surface, it seemed as if the demons of the 1990s had disappeared. Unfortunately, they were...