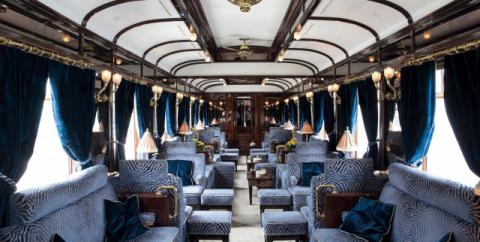 The world-famous Orient Express train will also stop at Gorna Oryahovitsa Station. It is expected to arrive in the railway city on August 31 and will only stay at the station for half an hour - from 6.50 to 7.20, when he will leave in the direction of Ruse.

The famous train composition was created in France in 1883. It gained notoriety through the crime novel Agatha Christie's Murder in the Orient Express. A few days ago it had already passed through the territory of Bulgaria, provoking great interest. Hundreds of curious citizens greeted the train at some of the stations and to take pictures.

Orient Express often appears in various works of literature, movies and television. At different times, the Austrian Emperor Franz Joseph I, the Queen of the United Kingdom Elizabeth II, the French writer Balzac and President Charles de Gaulle and Agatha Christie herself traveled with the legendary train. For this luxurious journey with the iconic train, 90 tourists from all over the world have paid € 9,000 each in one direction.

"The train left Paris. Passing through the European countries, it arrived in Bulgaria through Romania. On the territory of our country passed through the cities of Ruse, Varna, St. Zagora, Dimitrovgrad and Svilengrad, then continued to Istanbul. On the way back, the composition will pass through V. Turnovo, Dryanovo and G. Oryahovitsa, "said former railwayman Angel Maglov.

He added that Bulgaria has been a common destination for Orient Express since the late 19th century.