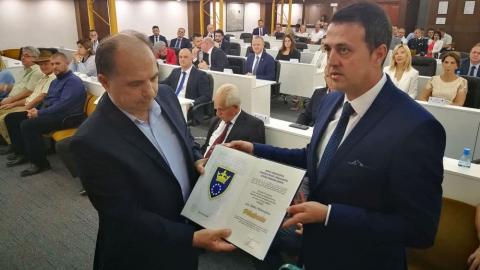 Bruce Berton, head of the Organisation for Security and Co-operation in Europe's mission to Bosnia and Herzegovina, said on Friday that the Zenica-Doboj Canton's decision to honour war crimes defendant Sakib Mahmuljin shows disrespect for the victims.

"To overcome the legacy of war, Bosnia and Herzegovina must first respect innocent victims of war. Awarding those who are accused of war crimes does the opposite, while undermining reconciliation and community relations," Berton said in a statement.

Mahmuljin is currently on trial for allegedly failing to stop Islamic volunteer fighters from the Mujahideen unit, which operated within the Bosnian Army Third Corps, from committing war crimes against Serb civilians and prisoners of war in the village of Vozuca in 1995, or to punish them afterwards.

According to the charges, the Islamic fighters, who came from Middle Eastern countries, killed more than 50 Serb prisoners in Vozuca and cut some of their heads off.