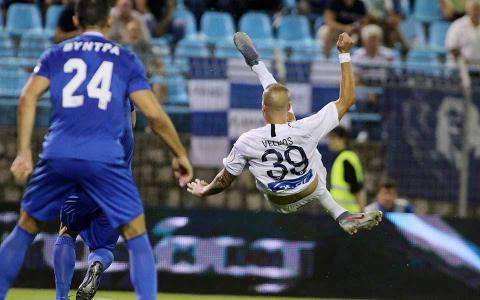 Greek soccer's giants have made a wobbly start in the new Super League 1 championship, while teams such as Xanthi and promoted Volos have stolen the show so far.

Double winner PAOK and Champions League challenger Olympiakos may have doubled up their wins on Sunday, but did so with unexpected difficulty, while Xanthi and Volos have also made it two out of two. Meanwhile, big names such as Panathinaikos, AEK and Aris have been suffering.

Bottom team Panionios, that has started the league on minus six points due to financial irregularities last season, troubled PAOK at Toumba, but the Thessaloniki team eventually won 2-1 through a late Karol Swiderski goal. Former Arsenal striker Chuba Akpom had given PAOK the lead before Sotiris Tsiloulis equalized for Panionios.

Olympiakos also had a hard time beating Larissa 1-0 away, having Mathieu Valbuena to thank for his...