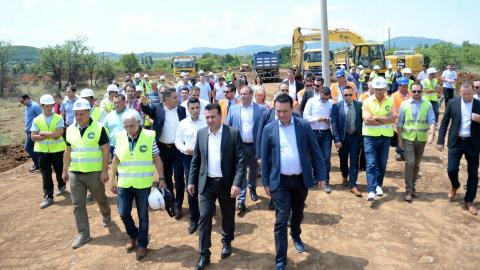 A new railroad in the south of the country. Photo: mtc.gov.mk

From the information made available so far, by the end of this year, or during next year, the government plans to start several big capital investments. But a big question is where the authorities hope to obtain the first 1.4 euros needed for them.

The government has already published the tender for the construction of a new medical clinical centre in Skopje. Costed at some 500 million euros, this is to be financed by loans from commercial banks. Construction is due to start this and last for seven years.

Another sizeable project is building a rail connection from the northern town of Kumanovo, near the capital, Skopje, to the Bulgarian border. With a total estimated cost of 580 million euros, the first and least expensive phase of the three phases, costing some 40 million euros, is already ongoing. The money for this is coming from the European Bank for Reconstruction and Development, EBRD, the EU's Instrument for Pre-Accession Assistance and from other grants and loans.

But then there is also the announced construction of two hydropower plants that the Prime Minister mentioned, Cebren and Galiste, which is planned to start next year. This is estimated to cost some 220 million euros.

The government also plans to start building 13 kilometres of highway from Skopje to the border with Kosovo at the start of next year. The cost of this project is estimated at 120 million euros.

In terms of timing, so far, Zaev has said only that the total sum of 5 billion euros will be invested over "the next several years". But to add credibility to this claim, the government will have to come up with additional...