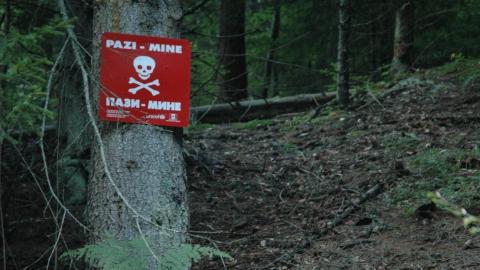 When two deminers were killed on August 25  nearby the town of Livno in south-west Bosnia while they were on duty in one of the minefields that still blight the country, it again highlighted the dangers faced by those who are working to clear the remaining unexploded ordnance left over from the 1992-95 war.

The deminers who died near Livno, in circumstances that are so far unclear, were among a total of 55 Bosnian deminers who have lost their lives at work since 1996, according to the Bosnian Mine Action Centre, BHMAC.

After a formal investigation, it will be known exactly what happened to the three-member crew from the BHMAC in the incident, in which another deminer was slightly injured.

Bosnia and Herzegovina is reported to be one of the countries with the most uncleared landmines on its territory.

There was a national plan for Bosnia to become landmine-free by 2019, but that did not happen.

Most dangerous areas in the case of landmines. Photo: BIRN

"The problem is present in 129 of the country's 143 municipalities, and the most dangerous areas are around Doboj, Teslic, Maglaj, Usora, Zavidovici, Gornji Vakuf, Sanski Most, Velika Kladusa, Travnik and Ilijas," BHMAC spokesperson Svjetlana Luledzija told BIRN.

Some 15 per cent of the total population - 545,603 people - are exposed to the dangers of unexploded ordnance, according to the BHMAC.

Lack of funds has slowed the process of ridding Bosnia of mines. Since 1996, more than 3,000 square kilometres have been cleared, but over the past six years, the BHMAC had an annual budget of around 20 million euros instead of the 40 million euros indicated in the Bosnian government's initial strategy.

The deadline for clearing the country of mines entirely has now been...