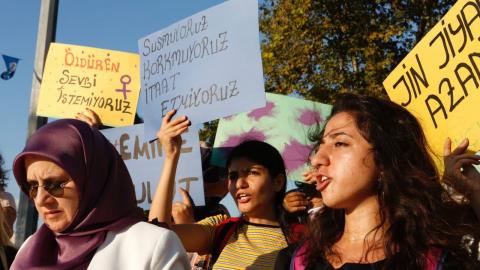 "The government does not enforce the law which is part of the constitution and a requirement under international agreements," Nuray Cevirmen, secretary of women's rights at the Human Rights Association in Ankara, told BIRN.

Cevirmen said that Turkey has a very conservative, male-dominated society in which men are resistant to challenges to their privileges.

"National and international legislation offers full protection to women but the Turkish government willingly hesitates to implement these laws in full because of its understanding of the role of women," she added.

Turkish state institutions do not release any regular data about murders of women but human rights NGOs jointly collect the gloomy data.

According to Anıt Sayac, which is intended to be a digital monument to women murdered in Turkey, 2,558 women have been killed by men since 2008.

The killings are on the increase over the past decade. Sixty-six women were murdered in 2008, but 396 women lost their lives because violence by men in 2018. So far this year, 246 women have been murdered.

"The issue of numbers is a big problem. There are few if any official statistics although women's groups have been asking for them for years," Professor Mary Lou O'Neil, director of the Gender and Women's Studies Research Centre at Kadir Has University in Istanbul, told BIRN.

"Women's groups keep their own statistics but these of course are mostly those that we know of and there is little doubt that these are under-reported," O'Neil added.

The data on violence against women that exists has been compiled from media reports but experts suspect that the reality is much worse.