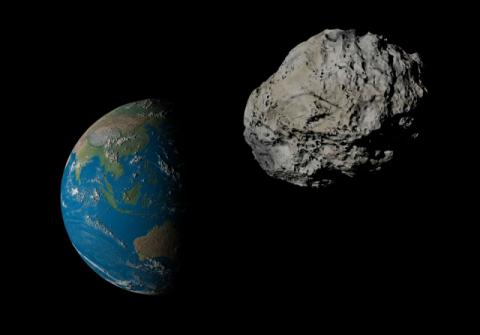 NASA and the European Space Agency are teaming up for an ambitious mission to use spacecraft to deflect an asteroid.

Researchers and engineers from the two agencies are meeting in Rome next week to discuss an idea they believe is a viable method to protect our planet, according to BGNES.

The project will target the smaller body of the Didymos double asteroid orbiting Earth and Mars. One spacecraft is destined to destroy it, and the other will investigate  Didymos ' remains after being destroyed.

The main body of Didymos is roughly 780 metres wide across, with its 'moonlet' about the size of Egypt's Great Pyramid, stretching to about 160 metres wide, Metro News UK reported.

The smaller body orbits the main body with a few centimetres per second, which makes working on changing its course completely possible, scientists say.

NASA will provide one of the spacecraft for the first part of the mission, and it should be ready by the summer of 2021.

The DART is scheduled to reach its target in September 2022, with the moment of impact being recorded by an Italian miniature satellite called the LICIACube.

A close-up of the asteroid debris will be investigated by a European Space Agency ship called HERA, which will be able to measure its mass and the shape of the crater.

HERA will also deploy a pair of its own mini satellites to perform the first asteroid radar drill that can gather information about its surface.

"Imagine a mountain in the sky with another rock about the size of the great pyramid swinging around it, that is Didymos.", "HERA is going to show us no one has ever seen before.", "Right now all we have is many years and theories but HERA will revolutionise our understanding of asteroids and how to...