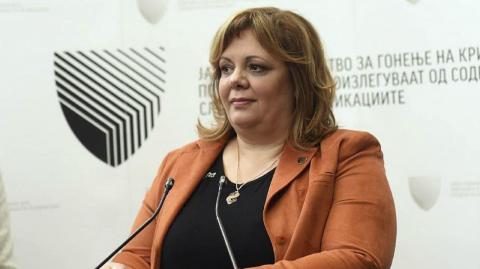 North Macedonia's outgoing chief Special Prosecutor, Katica Janeva, who was detained in August 21 as a suspect in the high-profile "Extortion" affair, has been criticised for sending a letter to her colleagues demanding that all their cases be transferred to the regular prosecutor's office.

The Special Prosecution, SJO, confirmed on Wednesday that it had received the letter, which instructs them to hand over all their cases, including those already in trial, investigations and pre-investigative procedures.

The SJO has said it will first inform North Macedonia's Chief Prosecutor, Ljubomir Joveski, about the content of this letter, and then decide what to do.

Some have seen the letter as an attempt by Janeva to save some of the SJO's ongoing cases, which could crumble due to uncertainty over its future and the dismissal of Janeva - which is expected to happen on Thursday at a parliamentary session.

Lawyer Zvonko Davidovic however, said such a letter had no value, coming from a person in detention. "What's next?" he asked in a short interview for Mkd.mk news portal, "Janeva demanding detention for some suspect in a SJO case, while she herself is in detention?"

Davidovic said the start of procedures to dismiss Janeva and appoint her successor should have happened right after she was detained.

The main opposition VMRO DPMNE party also condemned her request as "unacceptable", saying that a suspect should not be allowed to contact her colleagues in the Special Prosecution at all.

While its reputation has been damaged by Janeva's arrest, for the previous few years the SJO was widely seen as the spearhead of the country's fight against high-level crime.

Set up in 2015 as part of an EU-sponsored crisis agreement, it was tasked...