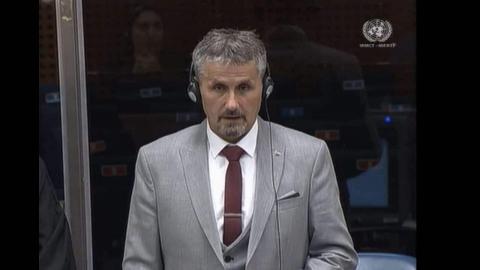 Defence witness Nebojsa Bogunovic, who was a police official in the Serbian town of Backa Palanka, told the Mechanism for International Criminal Tribunals in The Hague on Wednesday that he volunteered to go to the Eastern Slavonia region of Croatia in the summer of 1991 as the conflict there was developing.

Bogunovic was testifying at the retrial of Serbian State Security Service (SDB) officials Jovica Stanisic and Franko Simatovic, whose defence lawyers are trying to refute claims that the SDB, under their command, secretly established and financed training centres in Croatia and Bosnia and sent Serb volunteers and conscripts to be trained for military operations in SDB-run units there.

The SDB was part of the Serbian interior ministry.

Bogunovic told the court that his superior, the commander of police in the Serbian city of Novi Sad, Miodrag Zavisic, asked him if he "prepared to go together with me and Mr [Radovan] Stojicic and others to go across as a volunteer".

Stojicic, alias Badza, was at that time leading the Serb territorial defence force in the Eastern Slavonia region of Croatia, as Serbs rebelled against the Croatian government.

Bogunovic said that he and Zavisic, along with 16 more members of the Serbian police, in a convoy of five or six white Land Rovers without licence plates, armed with automatic rifles and guns, crossed over from Serbia into Croatia and went to a training centre in Erdut.

He insisted that he was not "sent" by the Serbian interior ministry, but went as a volunteer.

"I was not sent, I went voluntarily," he said.

Stanisic, the former chief of the Serbian SDB, and Simatovic, former commander of the SDB-run Special Operations Unit, are charged with having been protagonists in a joint...