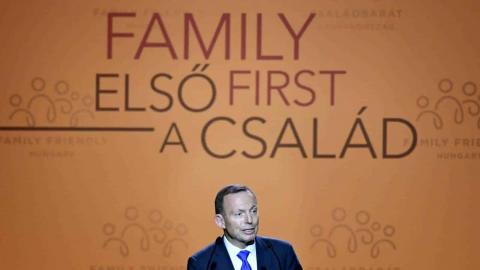 Former Australian conservative prime minister Tony Abbott has urged Central Europeans to be tough on the issue of migration, adding that Hungary and other countries in the region had every right to close their borders as they saw fit.

Abbott arrived in the Hungarian capital on Wednesday to speak in the Budapest Demographic Summit, on September 5 to 6, where fellow speakers included Serbian President Aleksandar Vucic and Hungarian Prime Minister Viktor Orban.

Before that, on Wednesday, the former Australian prime minister from 2013 to 2015 gave a lecture at the Petőfi Literary Museum under the title: "Immigration: What Europe can learn from Australia" - at which he said praised the tough line on border controls taken by Hungary and condemned the media and NOGs for allegedly helping people smugglers.

Abbott said it wasn't a problem when people flee war zones and cross one border to seek safety for their families. What was not acceptable, in his view, was for people to cross several borders illegally in search of a better life; he called these economic migrants.

Abbott, who no longer serves as an MP in Australia, said the boats need to be stopped and land borders need to be closed to such people. In his view, these were the best ways to stop human trafficking and drownings - and so save lives.

"What is most important, in closing borders, is that you have the right to do so," the former PM said of Hungary and its neighbours. Australia and Hungary had demonstrated that borders could be defended. "I know Europe faces a more significant challenge and the geographics are different. But people smuggling needs to be stopped; it is a moral duty," Abbott added.

Turning to the role of media and NGOs working in the Mediterranean, he accused...