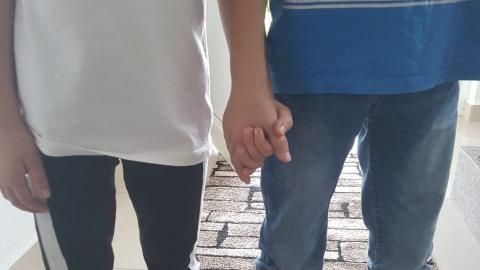 Most of the children joined their Kosovar families. Yvejs and his sister, however, were separated from two younger half-sisters. Fatime and Yvejs were taken in by their uncle in the northern town of Mitrovica, while the two younger girls, Isra and Alsa, joined their father's parents in a village near the central Kosovo town of Ferizaj/Urosevac.

The mother, Qamile, was forced into marriage with another Islamic State fighter from Kosovo, Skender Qerimi, after Besim was killed in 2014 and gave birth to the two girls, the youngest now less than a year old. Qamile, notorious for a photograph of her clutching a machine gun, was shot dead by a sniper in March this year.

"Each of us took those of their own blood," Besim's brother, Zenel, told BIRN. "I will do whatever I can to raise them. It is difficult, but this is their destiny."

"It was a difficult moment to see them separated from each other," he told BIRN. "They were like lost children and accidentally found by someone. They were scared, without parents, without documents."

The state officials involved, he said, cited 'tradition', "but it has been costly for the children," he said. "I will never forget their cries." The fate of Skender is not known.

Kosovo's government has a program in place for the rehabilitation and reintegration of former Islamic State fighters and their families, including counselling, food, shelter and help finding work.

"The Kosovo government has a strategic document for the prevention of violent extremism and in this document are involved all relevant institutions...