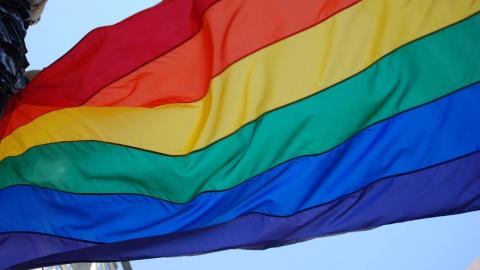 Sarajevo, which withstood a bloody siege by Bosnian Serb forces for 1,425 days during the 1992-95 war, has long been viewed as a city of tolerance, a cultural capital and a city that exudes resilience.

Sarajevo's positive reputation will indeed be tested by a new generation of post-war queer youth who refuse to remain silent or closeted, or to be invisible. They are rightfully demanding to live a life of dignity - one worth living out of the shadows by leading an openly gay life without fear.

"Sarajevo Meeting of Cultures" is the message of an inlaid marker on Ferhadija Street in Sarajevo. Photo: Buiobuione/Wikimedia commons

LGBTI people were denied two permits to publicly assemble in 2018. First, they were denied a permit by the Sarajevo authorities  to observe the International Day of Transgender Visibility in 2018.

They were also denied a permit by the Sarajevo city government to assemble to bring public attention to discrimination against LGBTI people, based on a new law entitled Temporary Use of Areas on the Territory of Sarajevo Canton, which is specific to NGOS and has been cited as a new barrier that poses a threat to LGBTI people's rights to publicly assemble, according to the Sarajevo Open Centre's 2019 Pink Report ('Annual Report on the State of the Human Rights of  LGBTI  People in Bosnia and Herzegovina').