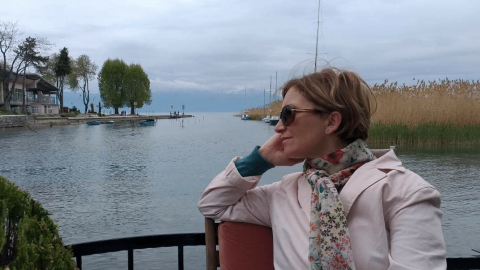 Raised in Kosovo, Tuda returned to live in Struga in 1993 at a time of growing political tensions in Kosovo. Together with her brother they opened the U2 - Cafeteria, a form of homage to the famous Irish band whose songs were popular at the time in Kosovo, especially because of the lyrics about freedom. It was while listening to U2's songs that Tuda felt inspired to write her own pop songs.

Together with her brother, Uran, they opened Art Kanal Radio, one of the only two Albanian-language radio stations in North Macedonia. Through this radio, a festival was organized in Struga in 1995 with the participation of such big Albanian stars as Aurela Gace and Aleksander Gjoka.

"Music was a dream I had shelved. I was singing for myself, but somehow seeing all these singers so close to me just inspired me. A friend of mine suggested I compete for the Festivali i Kenges and it was a good moment to give it a try," she recalls.

How it all began:

In 1995, Tuda made her debut at this festival with "Rruge" ("Streets"). She qualified for the final with a lyric that talked about streets and crossroads. "I sang this song the first night, and the day after people in the streets of Tirana greeted me and asked for my autograph," she says.

"I was shocked that the song had hit everyone. It was a hymn somehow for the Albanian people, a lot of whom were leaving abroad for a better life. I myself was at a crossroads, just as the refrain suggests. The song was broadcast every day on the Albanian national broadcaster," she adds.

Her travels to Albania intensified. As she points out, many people at that time thought that she was originally from Tirana, or that she was studying there....