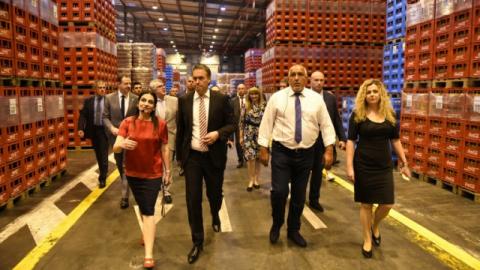 The bottling company Coca-Cola HBK Bulgaria officially opened the expansion of its production base in Kostinbrod, which includes a new production line and additional storage area. The investment in the project amounts to EUR 20 million or BGN 40 million, which was announced two years ago.

"With the new investment, we have a state-of-the-art production line that is 25% faster than our other production lines and needs 20% less energy to operate. This makes Bulgaria a regional export hub for production. countries such as Romania, Serbia, and Greece, "company CEO Jurg Burkhalter commented during the official event. According to him, the new bottling line is the most modern in all 28 countries in which the Coca-Cola HBC Group produces.

"Bulgaria was the first Eastern European country in which we started offering our products. 23 years ago we opened our base in Kostinbrod, and so far the investments in it amount to 200 million levs," he added. Burkhalter added that more than 2000 people are directly employed in the whole Coca-Cola system in Bulgaria, which includes a total of 5 separate companies.

With the new line at the Kostinbrod base, its capacity is doubled, thus increasing production by 9000 bottles of 0.5 liters per hour. Mainly additional production will be for export to the nearby markets of the Balkans, in particular to Romania, Greece, and Serbia. "We have been exporting to these countries so far, but on a much smaller scale. We will now be able to double our exports to them. As for the specific products that will be exported, these might be all of our product range, such as we will meet the demand, "Milena Zavalova, who is the director of the production centers of Coca-Cola HBK Bulgaria, told Money.bg. Most of the investment in...

Bulgaria is among the EU Countries with the Worst Rail Transport
Over half of Romanians not having private health insurance, not wanting one in next half-year
Topoloveni plum jam maker earns 775,000 euros for product promotion in UAE, Vietnam
President Iohannis:I strongly condemn violent attacks against innocent people that took place in Hanau
Excessive pesticide residues found in 1.66pct imported fruit and vegetables sampled in Romania

Romanian Film Traces Newspaper Exposé That Changed a Nation
PM Orban: We intend to continue to work on the Strategic Partnership with Japan; it's a very ambitious project
Brancusi Day - marked by embassies in Bucharest with images of his works from Pompidou, Guggenheim