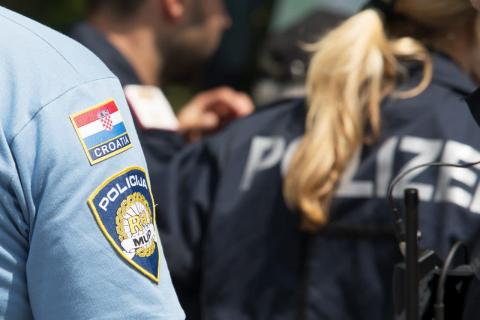 The Croatian Interior Ministry is planning to introduce an auxiliary reserve police force that will draw also on retired officers - mostly to help deal with the migrant burden and strengthen Croatia's border, which is also an EU external border.

Under proposed changes to the Reserve Police Regulation, the Interior Ministry will have the right to increase the force by 10 per cent, which means some 1,800 reserve officers can be employed.

"It is of the utmost importance for the security system to have trained and prepared reserve forces, and the risks that affect the security situation today, such as migrant pressure, terrorism, natural disasters and major disasters, require the rapid response of regular security forces," the ministry wrote on August 29, when it opened a public online consultation on the Reserve Police Regulation.

Mario Puskaric, president of the Union of Police Officers, told BIRN he supported the move, as many retired officers do some post-retirement work anyway, and because additional capacities, especially on the borders, were needed.

"You have a situation where you call a person from Zagreb or [the eastern region of] Slavonia, say, [to patrol] the border crossing at Korenica or in Donji Srb [on the Croatia-Bosnia border], while reserve police officers from those areas, who know the terrain, can be engaged," Puskaric said.

He said that costs occurred when a police officer from another part of Croatia had to go to work in such fields.

He also recalled that the Croatian government had adopted the Reserve Police Regulation in 2012, but had never used it, although he had proposed this to the former ministry and current ministry as well.

"Due to the migrant crisis, a lot of police officers are assisting [on...