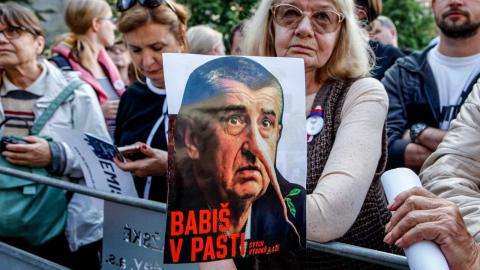 The Czech prime minister is off the hook for alleged fraud — for now.

For four years, Czech Prime Minister Andrej Babis has faced allegations that he illegally used EU subsidies to build a conference centre near Prague known as the Stork's Nest.

On Monday, the Denik N daily newspaper reported (in Czech) that the state attorney had dropped the fraud investigation that has dogged Babis's premiership.

As Prague Radio International reports, this means Babis can breathe a sigh of relief — but only a temporary one since the decision has yet to be approved by the prosecutor's superiors and the prime minister could still fall foul of other legal moves.

The Stork's Nest scandal helped fuel a summer of unrest as protestors taking to the streets when Babis appointed a new justice minister right after police recommended that criminal charges be brought against him.

Writing for Bloomberg Opinion, Leonid Bershidsky says that if Babis ends up not having to face criminal charges, it will mean more stability for the country and not necessarily the kind of illiberal excess associated with other populists in the region.

Middle-aged Czechs are most likely to be duped by fake news.

If you are aged 45-54 in the Czech Republic, there is a good chance you believe that secret societies rule the world, a common conspiracy theory, according to security experts.

As Eliza Siegel reports in Transitions Online, the reach of pro-Russian, anti-Western disinformation has expanded past fringe websites and into mainstream politics and family relations — and it is older generations who are doing much of the spreading.