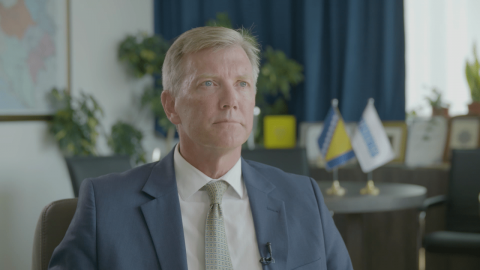 "We recommended to the Bosnian state prosecution to reconstitute regional teams that they had in order to maintain expertise in a particular area of Bosnia and Herzegovina. I think a part of [the problem] is the management, a part of it is the quality of indictments, so I think that there is an issue there," Berton explained.

He called on Bosnia and Herzegovina to finally adopt its revised state strategy for the processing of war crimes in order to speed up the process of allocating the remaining cases between the state and entity level.

According to the revised strategy, which Bosnia's judicial overseer, the High Judicial and Prosecutorial Council, approved a year ago, all war crimes cases should be completed by 2023, with the most complex ones being dealt with at the state level and all others referred to entity-level courts.

Thousands of cases remain unprocessed and a previous deadline for completing them was missed in 2015.

Denis Zvizdic, chairman of the Council of Ministers, the executive branch of Bosnia and Herzegovina's state-level government, said in July that the problem preventing the revised strategy from being adopted was so-called 'Category A' cases which were transferred, before the investigations were finished, to Bosnian prosecutors by Hague Tribunal prosecutors.

Bosniak politicians have been delaying the adoption of the strategy, claiming that there needs to be a specific order in it to make sure Category A cases are a priority because the Bosnian prosecution is not focusing on these cases.

However, Berton argued that "our analysis shows that the prosecutor's office has actually prosecuted a lot of those [Category A] cases".

"For us, there is no reason why the revised strategy shouldn't therefore be...