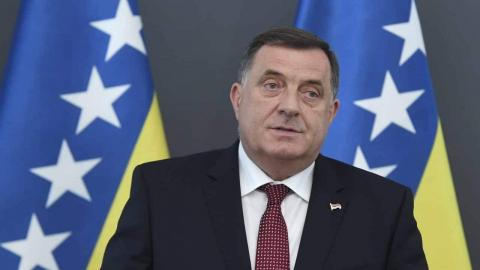 Ukraine's Foreign Ministry has issued a protest note about recent comments made by the Serb member of Bosnia's state presidency in support of Russia's annexation of Crimea.

Earlier this week, Milorad Dodik stated in his interview to Russkiy reporter that he "considers Crimea to be Russian", and that Bosnian recognition of this unilateral annexation was "necessary".

He warned that he was not sure he could "accomplish recognition", however, as the two other members of the Bosnian state presidency, representing the country's Croats and Bosniaks, "have Western stances".

"His support for the illegal annexation of Crimea does not match the position of Bosnia and Herzegovina, but is rather his personal opinion," he said.

Komsic also stated that, as a country aspiring to soon become an EU candidate country, Bosnia "remains true to the position of the EU, demanding that Ukraine's independence and integrity have to be respected".

This is not the first time that Dodik has caused anger over his position on the Russian annexation of Crimea.

In October 2018, speaking to the Russian newspaper Izvestia right after the general elections in Bosnia, Dodik said that he would use his new position as state presidency member to "submit a state-level initiative to recognise Crimea as a part of Russia", adding that he "saw nothing wrong" with its annexation.

Ukraine challenged Dodik's remarks then as well, qualifying his words as "hostile".

Dodik's pro-Russian stance and close connections with the Kremlin have often drawn criticism from political opponents and...