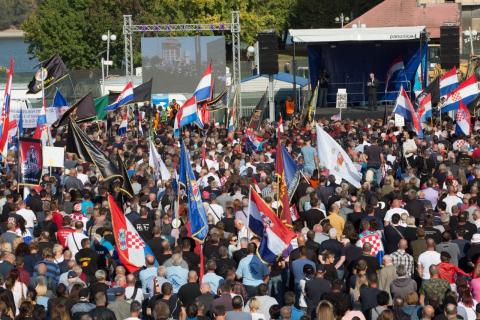 After war veterans called for a boycott of Serbian singers at a music festival in Croatia's capital, Zagreb, a leading analyst said that such hard-liners had become more important than they should be in Croatian society.

"I don't think they are becoming more important, but they are certainly too important factor… They don't have to be asked [about events] … they consider themselves to have been asked," political analyst Zarko Puhovski told BIRN.

"And when they appear [with their statements], no one dares to say it does not concern them, or that they are not qualified for this," he continued.

Puhovski spoke ahead of Zagreb's annual September Festival "Rujanfest", at which the Zagreb branch of the Croatian Disabled Homeland War Veterans' Association, HVIDRA, complained about the announced performance at it of "Serbian folk singers", calling for a boycott of "singers who are not from our area".

"In the capital of Our Beautiful [Croatia], for whose sovereignty we fought, the organizers of … [Rujanfest] have decided to host Serbian folk singers under the slogan 'Move your boundaries of entertainment'," HVIDRA wrote in a press release, calling on citizens to boycott the concerts.

At the festival which begins next Friday, many Croatian pop stars will perform, but many Serbian performers have also been invited, including Zeljko Joksimovic, Dejan Matic, Zeljko Samardzic and Miroslav Ilic, a Serbian folk singer whose 2017 Sarajevo concert was cancelled after a video from...