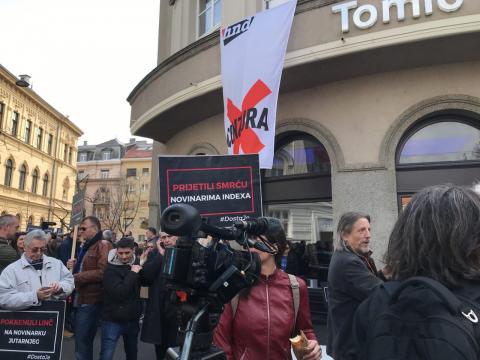 Reporters Without Borders said in a statement on Tuesday that a series of threatening messages sent to Croatian journalists recently were intended "to attack, intimidate and smear journalists to the point of dissuading them from pursuing their mission to report the news".

The statement condemned what it called the Croatian government's "oppressive silence" about the incidents, and asked: "Are the Croatian words 'Smrt novinarima' ['Death to journalists'] going to become commonplace in Croatia?"

In the coastal city of Split at the weekend, graffiti appeared describing journalists as "earthworms", while few days beforehand, eggs were thrown at a car belonging to Slobodna Dalmacija journalist Andrea Topic. Topic also received threats last year and her car tyre was punctured.

Reporters Without Borders also recalled that in late August, words "Death to journalists" were written on the outside of a news website's offices in the coastal city of Zadar. The same words were painted near the Zagreb headquarters of the N1 TV channel and two websites, Net.hr and Telegram.hr, in March.

"Several police investigations have been opened with the aim of identifying those responsible for the anti-media graffiti but the Croatian authorities have remained astonishingly silent about them and other recent attacks on journalists," the watchdog organisation's statement said.

It added that the Croatian judicial authorities decided a year ago to take no action against a person who posted death threats on the Facebook page of journalists at news website Index.hr.