Erdogan appears unfazed by PM’s call for end to threats 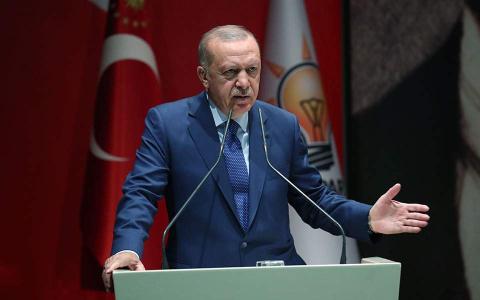 Despite Prime Minister Kyriakos Mitsotakis' call for Ankara to prove its willingness to improve bilateral ties, Turkish President Recep Tayyip Erdogan appeared unfazed on Monday, saying that Turkey is ready to deal with any threats against it in the region.

Erdogan said that Ankara has a response to any threat from Syria to the Eastern Mediterranean and from Jerusalem to the Aegean.

His remarks coincided with Turkish Foreign Minister Mevlut Cavusoglu's visit Monday to occupied northern Cyprus and his announcement that a Turkish consulate will open in the fenced-off town of Famagusta.

The move is seen as a bid by Ankara to amp up the pressure on Nicosia amid discussions about a resumption of peace talks.

Cavusoglu also called for political equality of Turkish Cypriots and 50 percent participation in decision making in a unified island. Mitsotakis and...