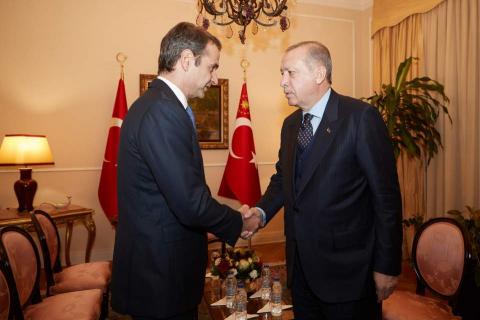 Greek Prime Minister Kyriakos Mitsotakis will meet with Turkish President recep Tayyip Erdogan on the sidelines of the 74th session of the UN General Assembly which will be held in New York on September 17-30.

During their meeting, the two officials will discuss, among others, the increased tensions in the Eastern Mediteranean and Turkey's activities in Cyprus' exclusive economic zone and the region of Famagusta, in the Turkish-occupied north of the island.

Speaking earlier on Tuesday during a visit of Cypriot President Nicos Anastasiades, Mitsotakis criticized Turkey for provoking tensions on the island, arguing that Ankara was becoming isolated internationally.
The two leaders also reiterated "their absolute will for the resumption of substantive negotiations that will lead to a viable and functional solution to the Cyprus problem."